Astoria is a port city and the seat of Clatsop County, Oregon, United States. Situated near the mouth of the Columbia River where it meets the Pacific Ocean, the city was named after John Jacob Astor, an investor from New York City whose American Fur Company founded Fort Astoria at the site in 1811. It holds the distinction of being the first permanent United States settlement on the Pacific coast and for having the first U.S. post office west of the Rocky Mountains. 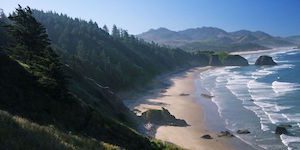